BVI Snorkeling, Scuba Diving And Activities For Your Sailing Charter

Where Are The Best Places To Snorkel & Scuba Dive In The BVI?

Snorkeling is very popular in the Virgin Islands. There are many spectacular spots in the Caribbean Islands. Below you can find the best BVI snorkeling and scuba diving spots for your yacht charter vacation.

The British Virgin Islands chain of islands contains an amazing variety of islands ranging from the coral atoll of Anegada with its long white sand beaches to the main island of Tortola with its lush green mountains.

One of the best ways to discover this beautiful underwater paradise, with its incredible visibility, coral, reefs and plentiful fish populations, is by snorkeling. What is most wonderful about snorkeling is that it is easy. There is no heavy gear; no need for special lessons and it is suitable for all ages- from school children to grandparents.

The BVI Are Perfect For Snorkeling & Scuba Diving

Whether swimming from the beach, slipping over the side of your dinghy, or just jumping off the transom of your BVI Yacht Charter get a face mask, snorkel and a pair of fins and start exploring the undersea world of the BVI.

If you don't bring your own snorkeling equipment, many sailing charter bases can provide it to you for a small fee.

Here Are Our Favourite Snorkel Spots In The BVI 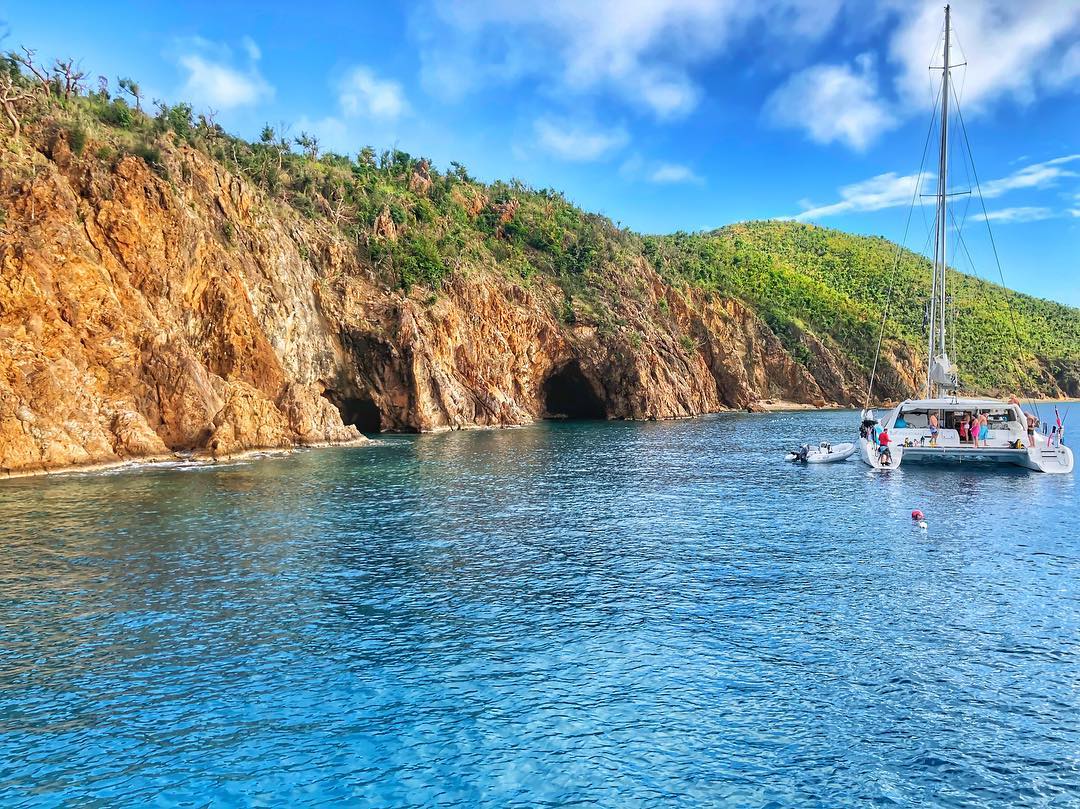 The Caves. Photo by @alton.bertie. Used with permission.

Thought to be the site of Robert Louis Stevenson’s Treasure Island, Norman Island has a fantastic cave system that has made it a popular stop for adventurous tourists. Bring a flashlight to illuminate the colorful coral, which lives at the base of the caves.

2. The Wreck of the Rhone (Salt Island) 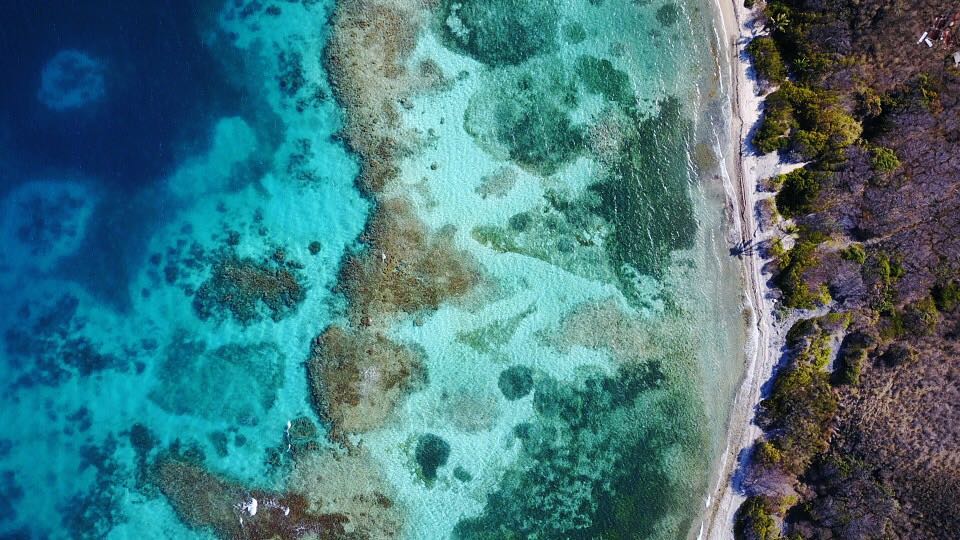 Salt Island, Wreck of the Rhone. Photo by @hanhanbvi. Used with permission.

At the bottom of the Caribbean Sea just off Salt Island’s Lee Bay, lies the wreck of a British Royal Mail Steamer. The RMS Rhone is one the most extraordinary shipwrecks you can snorkel in the BVI and all of the Caribbean. Buried under the sea since it's wreck in October 1876 during a hurricane, plenty of artifacts are still visble today. Although primarily a dive spot, you can snorkel above it for a bigger picture view of the wreck. 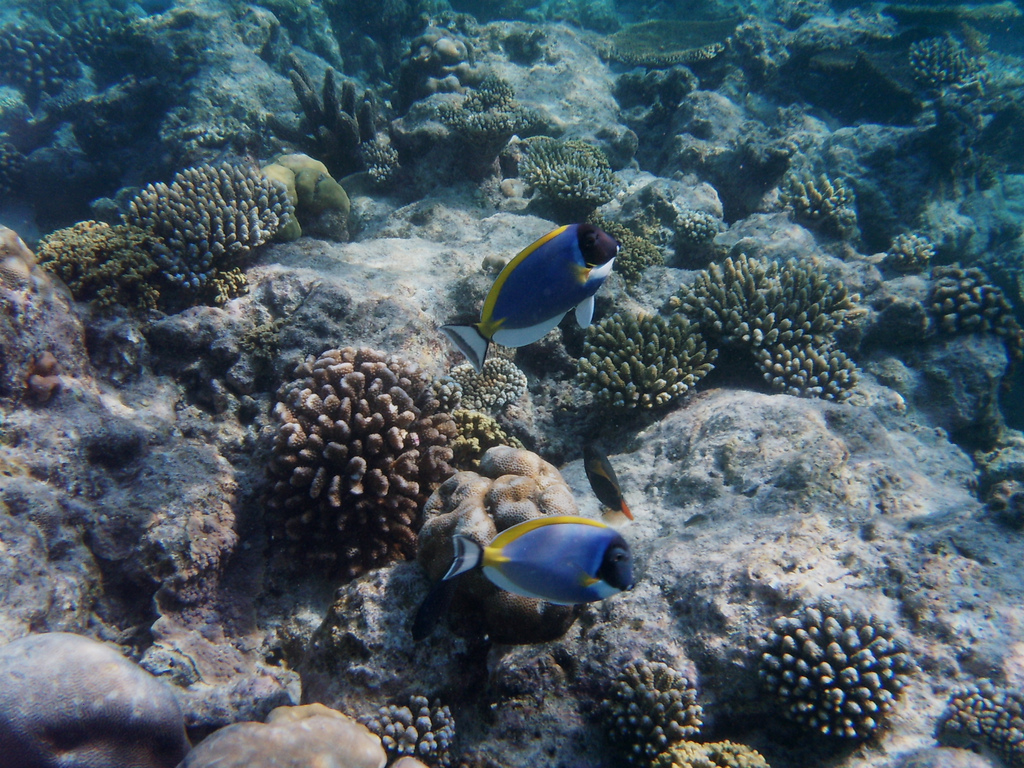 South of Manchioneel Bay off the western coast of Cooper Island, Cistern Point is a shallow diving spot with large rock rising out of the water, marking the spot of a vibrant coral reef system perfect for snorkeling. Since it's less popular than some of the larger snorkel spots, you are more likely to have the reef all to yourself to explore. 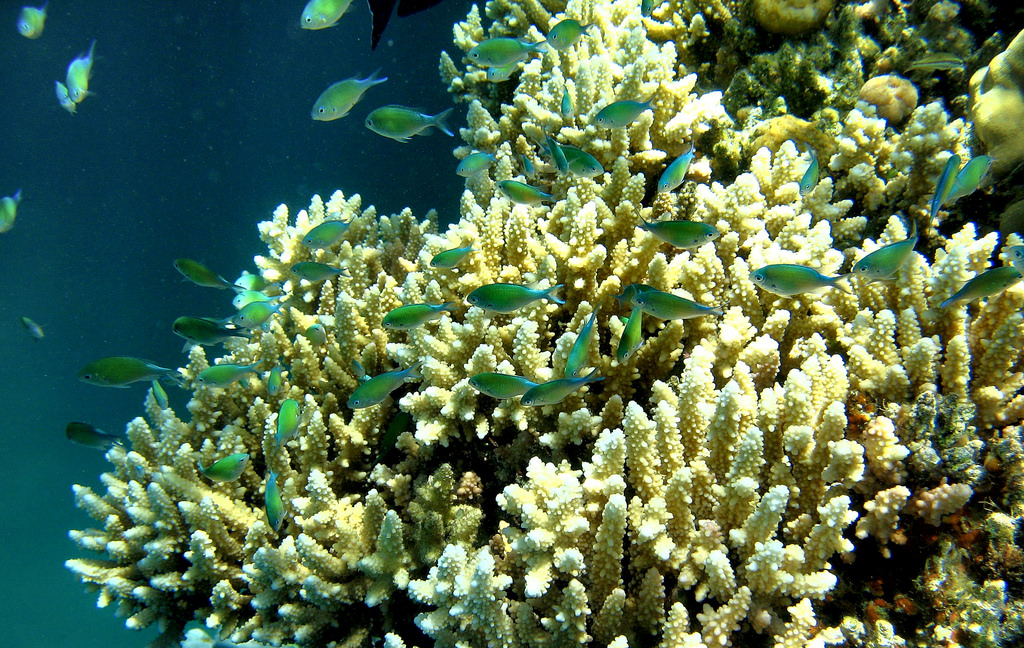 In Hallovers Bay off the west coast of Cooper Island, the Blue Chromis Reef has lots to offer eager snorkelers. Reef fish frequent this spot, including the blue chromis, which the reef is named after. With a calm current and good visibility, you can easily snorkel here for hours on end.

Tip: If you look hard, you may spot the wreckage of a twin seat airplane at about 35 ft. below. 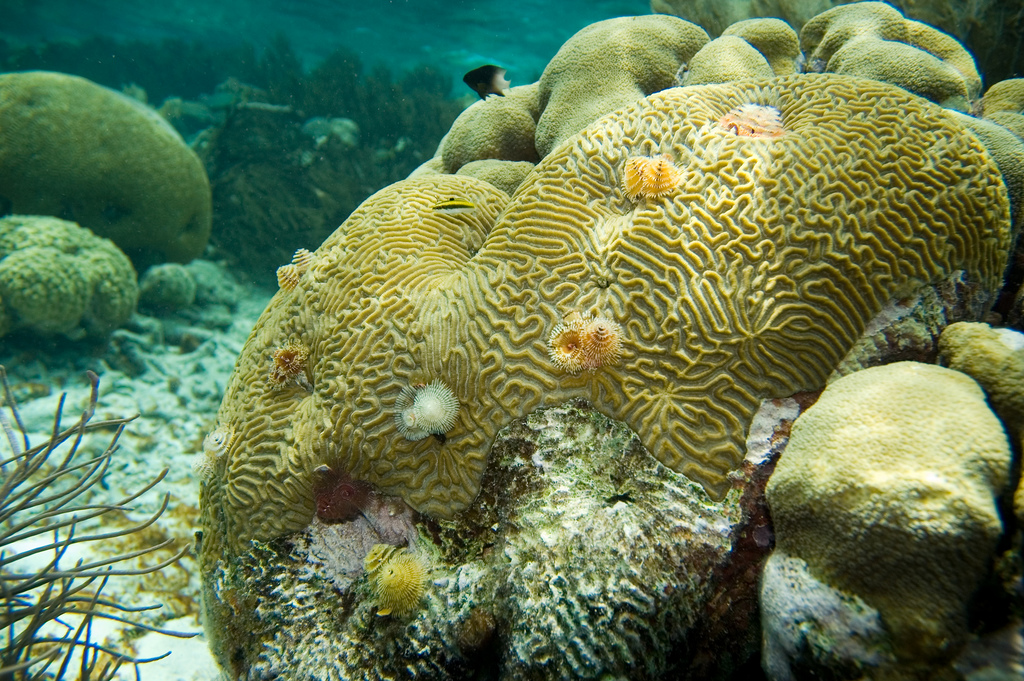 Located off Ginger Island, a private island within the Little Sisters, is a popular snorkel BVI site called Alice’s Backside. Abundant with sea creatures and coral, you’ll find yourself in awe of the underwater landscape that stretches across the Sir Francis Drake Channel. 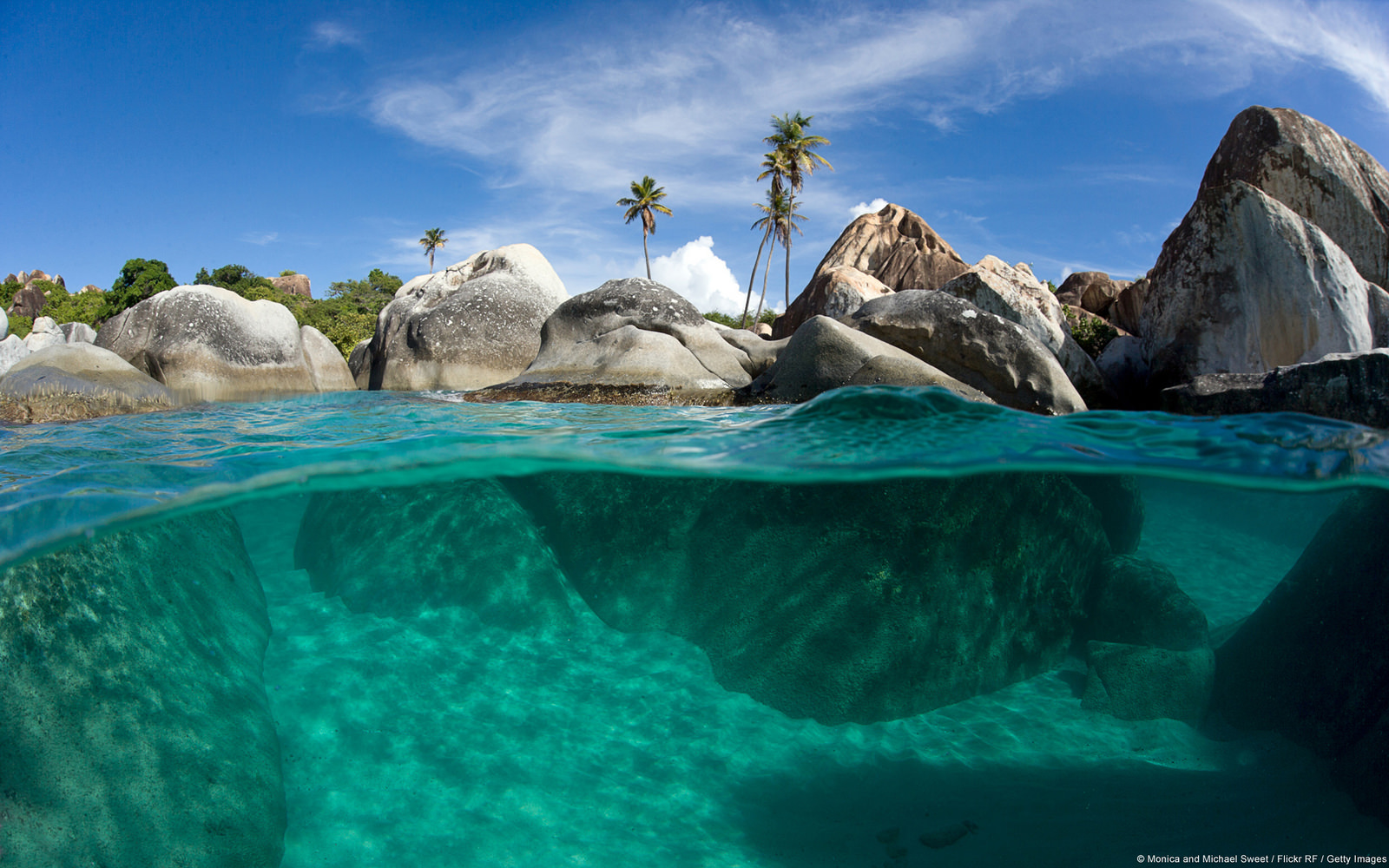 A rocky shoreline with impressive boulders, caves, and tide pools make up the scenery of a popular snorkeling spot known as The Baths. Part of the Devil’s Bay National Park in Virgin Gorda, you can snorkel a trail, following schools of fish as they weave in and out from the rocky crevices.

Expect to see: Multiple species of coral, tropical fish, caves and boulders (both above and below the water) 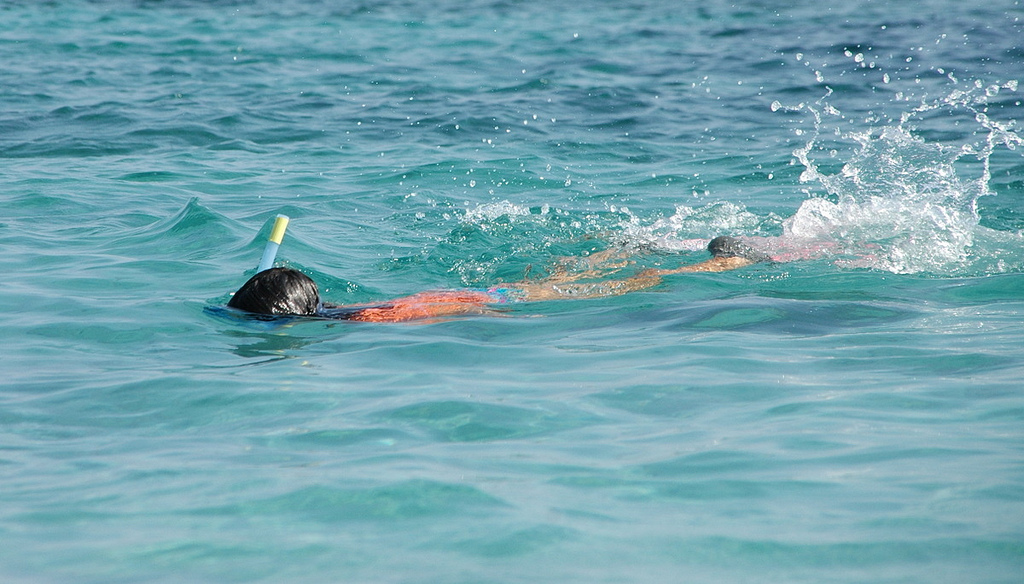 Named after the colorful rocks that make up Pelican Island, Rainbow Canyon attracts snorkelers and divers alike. A wide variety of sea life makes their home here, and the canyon provides an excellent alternative to Pelican Island’s most famous snorkeling and dive spot, The Indians. 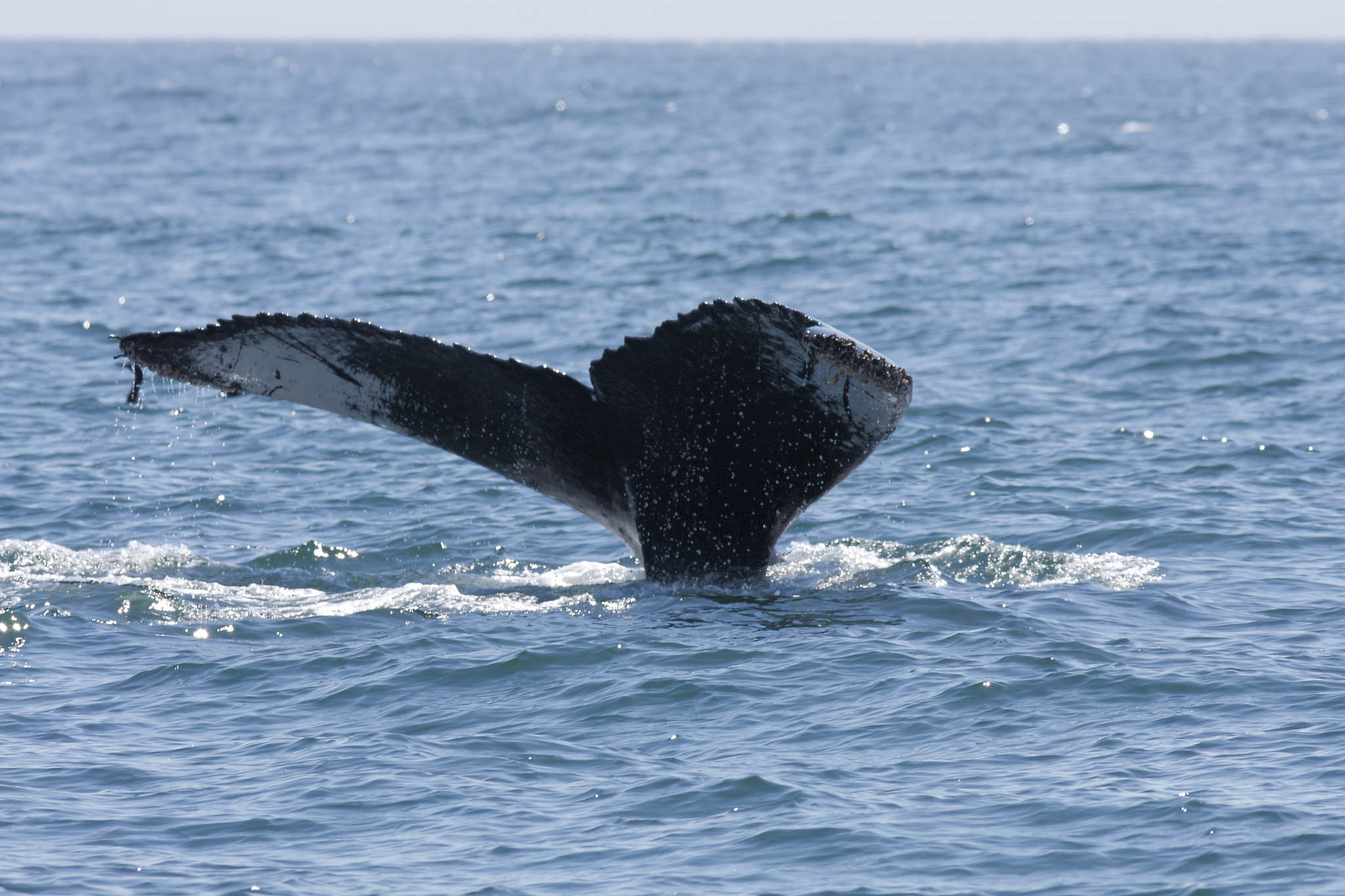 Off the northern tip of Peter Island, a shallow reef starts near the surface of the water and slopes down to nearly 40 feet in Buttonwood Bay. Located in a secluded bay, you can snorkel and enjoy a drink at the Lazy Iguana Beach Club before heading back to your yacht. 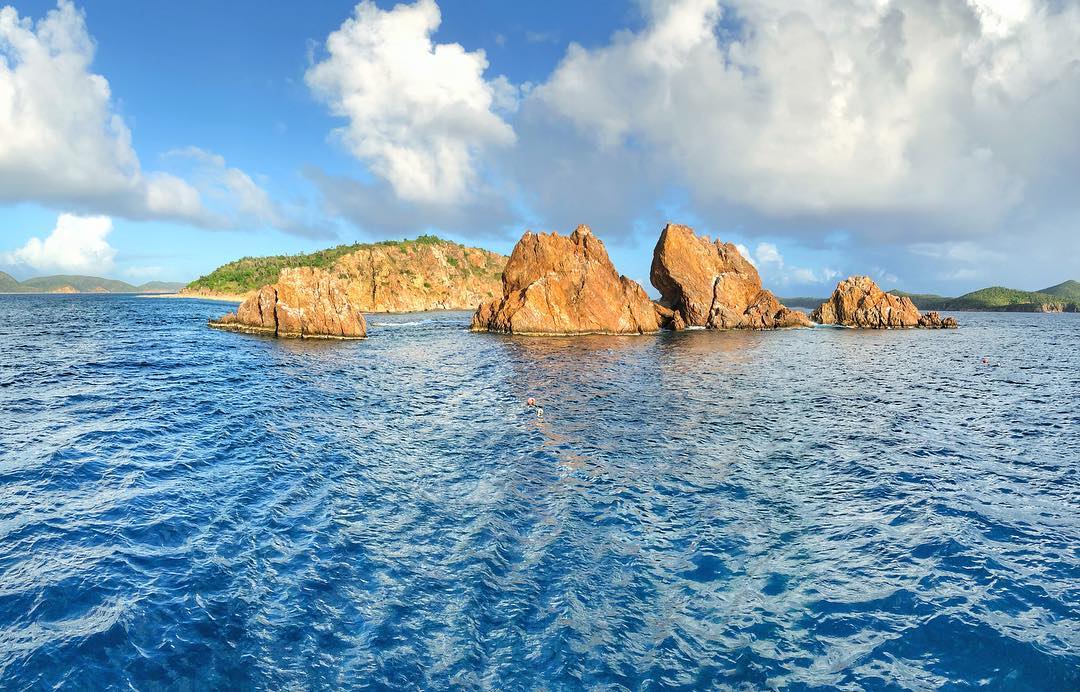 The Indians. Photo by @alton.bertie

A popular snorkeling spot in the BVI, The Indians are named after the native “Indians” who occupied this area of the Caribbean Islands before its settlement by the British. A fantastic reef lies below the rock formations here and allows you to snorkel the perimeter without having to venture too far out to see marine life.

Tip: Because it’s full of life, and a busy snorkeling spot, we recommend stopping at the Indians during the early morning hours in hope to avoid larger crowds.

What do you think of our picks for the best BVI snorkeling spots?


If you’re ready to have your own underwater adventure in the British Virgin Islands, book your charter and start planning your trip.

1. Wreck of the Chikuzen

The Wreck of the Chikuzen is considered one of the most amazing diving sites in the BVIs thanks to its remote location, seemingly in the "middle of nowhere." Situated 12 miles NW of Virgin Gorda, lying at a depth of 75ft. and surrounded by flat sands, this is the perfect place for marine life to assemble. This diving site is recommended for advanced scuba divers because of its remote zone and the regular 3 to 5 foot swells often hitting it. This Japanese refrigeration vessel, measuring 246 feet long, attracts visitors such as schools of barracuda, horse-eye jacks and snapper, stingrays, eagle rays, nurse and reef sharks, huge Jewfish, spadefish and much more. It is considered an adventure for avid explorers! So, in your next BVI Scuba Diving experience, challenge your skills! You won’t regret it.

2. Wreck of the Rhone

Voted one of the ten best wreck dives in the world, the RMS Rhone, a British Royal Mail steamer, rests in the depths of the National Marine Park off Salt Island and is perfect for diving exploration. Its story tells that during a furious storm in 1867 an explosion occurred in the boiling room scattering the wreck in separate locations. Today the wonders of its history lie in the depths of its waters where several features still remain intact (such as its bow, lifeboat davits, wrenches and portholes). The Rhone provides an amazing swim-through site possible for great underwater adventures. Your private chartered yacht can take you to see this amazing place where you can watch for turtles, lobsters, and green and spotted eels wandering through the fascinating relics of the ship’s history. 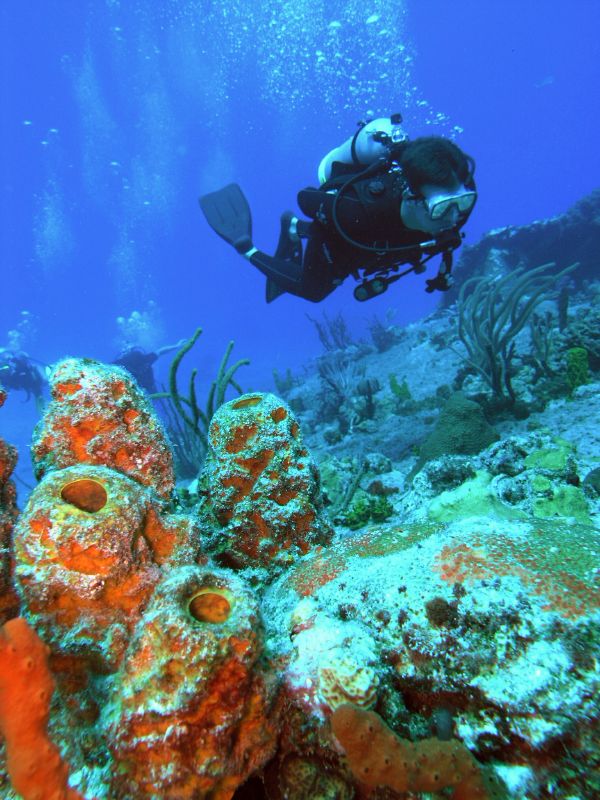 Wreck of the Rhone, photo by Chip Gallent. CC BY 2.0

The name itself, "The Playground," suggests images of a perfect dive spot—and that's completely accurate, thanks to the location's massive and colorful caves. Made of huge boulders with caves, passageways, ledges and summits, all covered in bright red and orange sponges, this natural site is the shelter for a wide variety of diverse sea creatures. Described as the ‘Big Animal Dive’, sea creatures enjoy playing hide-and-seek in these alcoves, so get your underwater cameras ready for a fun adventure in the depths! You BVI yacht charter can take you to explore this perfect and fun diving spot!

The vibrant underwater landscape and multiplicity of colorful fish make Painted Walls one of the most popular dives in the BVIs. The rocky ridges are covered with orange, purple, red, green and yellow encrusting coral. This unique and mysterious site, full of overwhelming vibrant colors, is an underwater photographer’s paradise. Structured with vertical walls, parallel passageways, and canyons that lead to arches, all are adorned with vivid sponges and multi-colored coral. Don't forget your camera for an irreplaceable lasting memory. 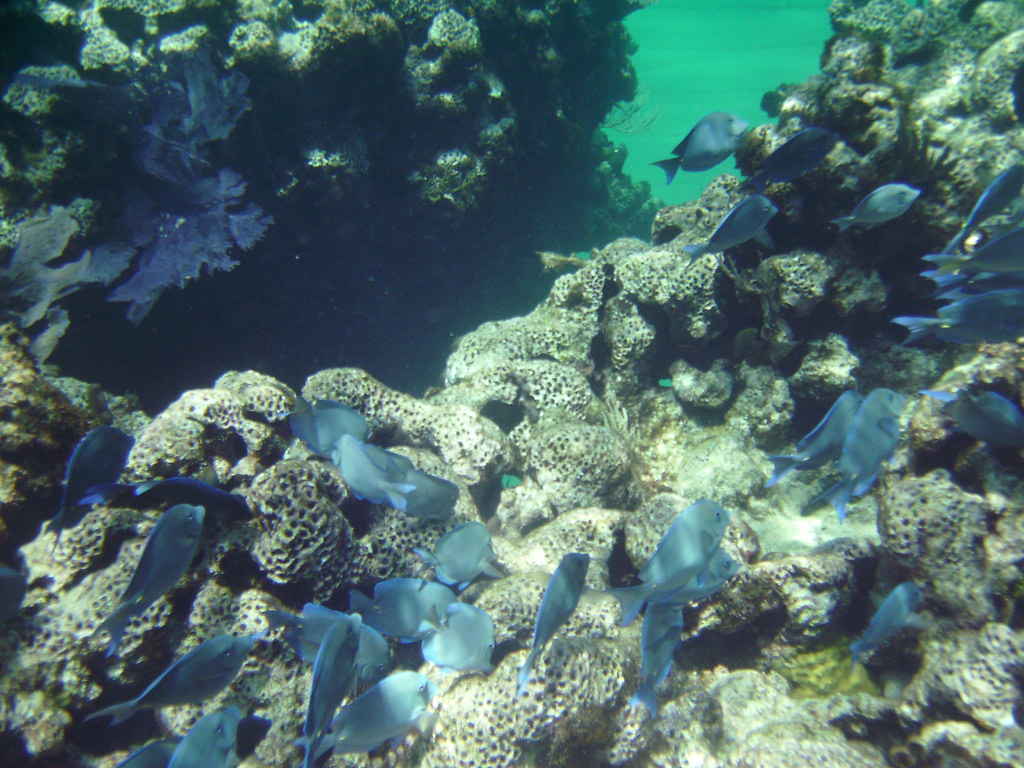 Virgin Gorda is the third-largest island after Tortola and Anegada, covering a range of around 8 square miles. It is said that Christopher Columbus named the island “The Fat Virgin” due to the island’s profile seen on the horizon that looks like a fat woman lying on her side.

You can’t miss the wonderful underwater scenery filled with colors and beautiful fish, nor the quiet coves within. For divers novice to advance, paradise in underwater awaits to be discovered. Some names of diving sites found around Virgin Gorda are The Invisibles (advanced, 60 ft), Mountain View (novice, 70 ft), The Aquarium (novice, 35 ft). On your private yacht charter, you can explore all the different diving spots Virgin Gorda has to offer. 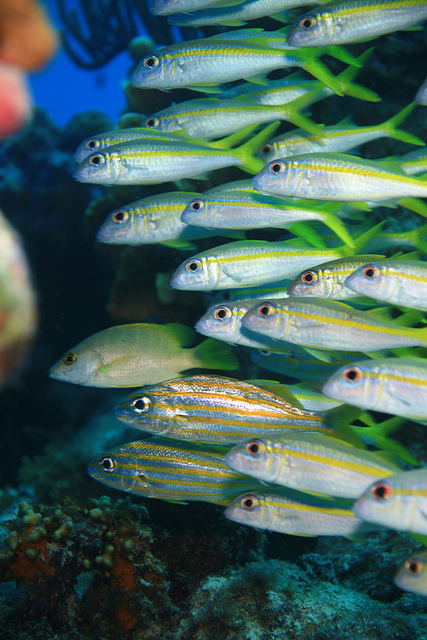 You don't want to miss out on the incredible wonders you will encounter in Jost Van Dyke. Named after a former pirate, it is a colorful scene where fish lovingly swim right past you—and yes, you will be dazzled by the colors and numerous reef life. The best thing about diving Jost Van Dyke is that there are a lot of secret locations for exploration for divers of all levels. From caves to drop offs, deep open ocean scenery and coral gardens with an incredible amount of sea life await you!  Don’t worry if you're not a diver, you can catch up with the fun by joining a Snorkeling and Eco-tour! 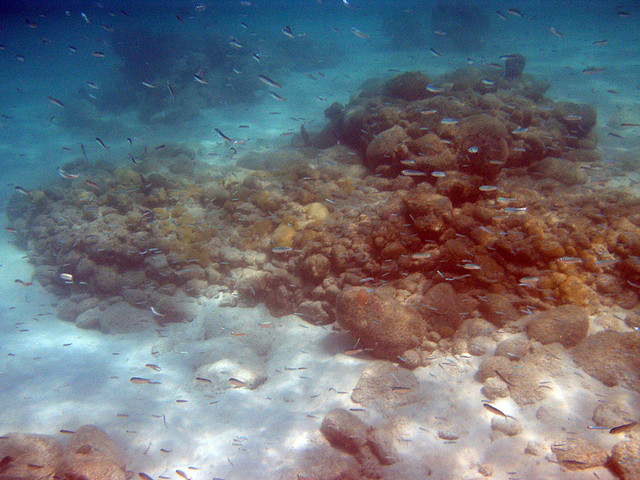 This reef runs from 30 to 80 feet in depth and is exposed to the open Caribbean Sea. It is host to a group of big fish and smaller creatures, such as tiny crabs and baby eels in the anemones. Don’t forget to capture the image of the colorful reef. Located in the Southwest of the Norman Island, this sheltered and shallow dive is also perfect for beginners. A BVI Scuba Diving Yacht Charter can take you see this amazing place! 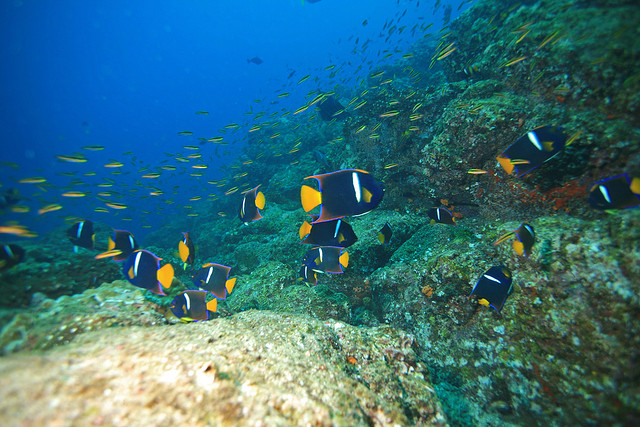 Wreck of the Inganess Bay

Another one of BVI’s amazing wrecks found near the shore just south of Cooper Island is the 136-foot island freighter Inganess Bay, sunk in August 1996 by the BVI Dive Operators Association. This ship was built in 1950 in Holland for a Scottish company and today serves as a relatively new and interesting dive site. Popping up from the water the wreck is covered by amazing corals and teams a variety of fish and sea life. This site is protected from swells and winds. Divers from all levels can penetrate the various rooms and hallways of the ship and be amazed by the diverse attractions this site has to show. 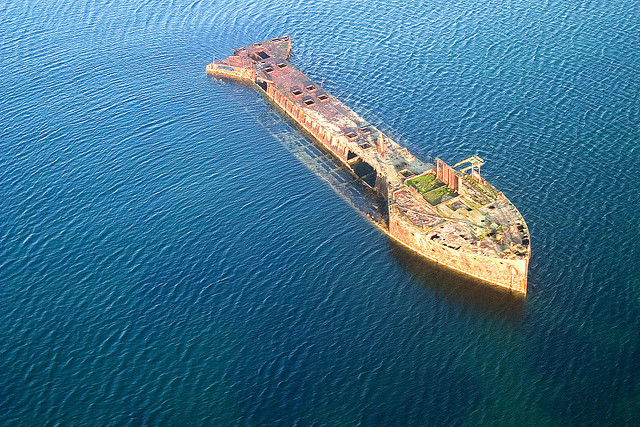 Wreck of the Inganess Bay, photo by Colin Moss

One of the Dog Islands is the West Seal Dog located between Tortola and Virgin Gorda. Only a 15 minutes boat ride from Spanish Town, you may find this volcanic diving site home for a variety of underwater creatures. Its caves, niches and rocky formations are filled with colorful sponges and corals, so don’t forget your underwater camera to capture the beautiful scenery and amazing sea life found here! 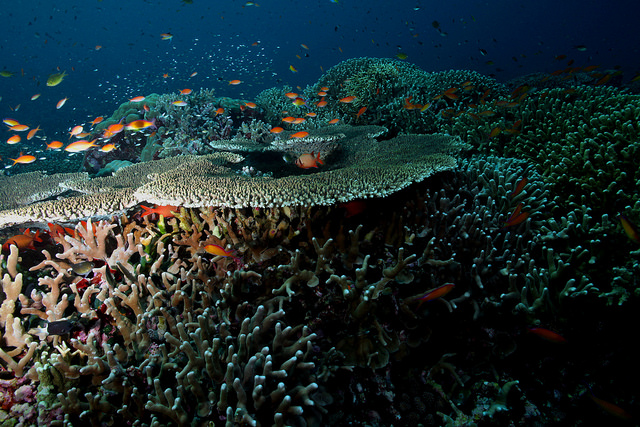 BVI Scuba Diving Yacht Charters are very popular in the Caribbean, and scuba diving is just one of the many activities to explore during your vacation. BVI is considered one of the best places to snorkel in the Caribbean due to warm temperatures, amazing marine life, and unique diving spots. The BVI is the perfect combination of holiday adventure and paradisiac scenery all around. Book your BVI Scuba Diving Yacht Charter as your next vacation destination!

So what are you waiting for? Book your next yacht charter here and visit the best BVI scuba diving sites!

Are you ready to start the search for your perfect yachting holiday in the BVIs?

The Ultimate Shopping Guide for the Virgin Islands

Both the U.S. Virgin Islands (USVI) and the British Virgin Islands (BVIs) are top vacation and yacht charter destinations for many avid travelers. The USVI, made up of four larger islands including St. Thomas, St. Croix, St. John and Water Island, are a hub for international shoppers thanks to its $1,600 duty-free allowance and no sales tax.

The Ultimate Shopping Guide for the Virgin Islands

OTHER AREAS WITHIN CARIBBEAN